St. Paul’s Cathedral: landmark of London, highest point of the City, and a Grade-I visual wonder that never gets old when walking to work over the bridge.

Pretty much everyone knows the world-famous English Baroque-style cathedral opened in 1708 and was designed by Sir Christopher Wren after the Great Fire of London in 1666 (fourth time lucky for the site). But St. Paul’s is a marvel of other, lesser known facts as well, that will make you want to plan an especial visit.

1. The crypt is the largest in Western Europe. Extending the entire length of the cathedral above, St. Paul’s designer, i.e. Sir Wren, was also its first occupant. In 1723, he was buried in his creation, his gravestone reading, “If you seek his memorial, look about you.” Very apt, very succinct; we like it.

2. As stunning as it is, it’s no wonder that St. Paul’s has caught the eye of many an artist (think Canaletto, think Shepherd, even Turner). So too the location scout’s notice, having become the setting for scenes from Mary Poppins, Harry Potter and the Prisoner of Azkaban, and Thor: The Dark World, among others. St. Paul’s has star quality.

3. The cathedral prides itself on being a gallery of sorts for various artworks as well. In 2010, the Anthony Gormley sculptureFlare II was installed in the Geometric Staircase, while in 2014 Gerry Judah was commissioned for an installation (to commemorate the centenary of WWI) in the nave. Even Yoko Ono has had an installation in the cathedral. And, of course, Henry Moore’s 1943 limestone carving of the Mother and Child rests in the north choir aisle (while Moore himself rests in the crypt below).

4. As any cathedral worth its name does, St. Paul’s has bells, glorious bells. And its two largest bells have names: Great Tom and Great Paul. While the latter hasn’t rung for many years (and needs fixing), Great Tom is sounded for a royal death (the last was the Queen Elizabeth the Queen Mother, in 2002), or that of the Bishop or Lord Mayor of London. However, a rare exception was made for the US President James Garfield, who was assassinated in 1881.

5. Obviously, we can’t discuss St. Paul’s without mentioning the Dome. Reached internally by around 560 steps, it’s still the second largest in Europe (to Rome’s St. Peter’s). Supported by eight arches, it weighs 66,000 tonnes, reaches up to 111 metres, and its internal façade is decorated in the frescoes of Sir James Thornhill. It has three galleries (the well-known Whispering Gallery, the external Stone Gallery, and the narrow Golden Gallery). From this top platform, the views of the City are simply divine. 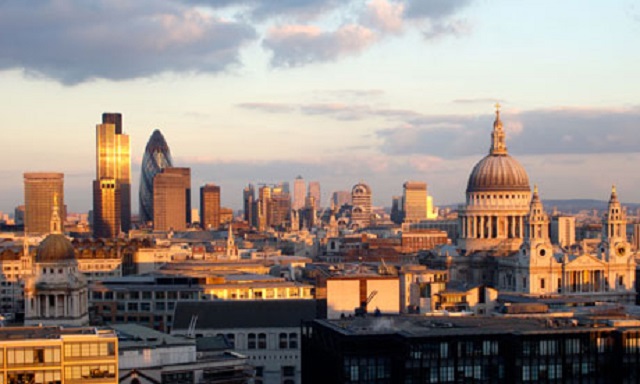 Open from 8.30am until 4.30pm for sightseeing, it costs £18 these days for entrance to the cathedral. However, do make a proper outing of it and also grab yourself a nice hot cuppa from the Crypt Café for a warm up from the autumnal chill. Or, if you fancy some of the best coffee in London, head to the close-by taylor st baristas.

Want updates on what’s happening in the City? Sign up for our newsletter here!